The "Good old days" might mean different things to different people. The list of death and murder in a time so often envisioned as idyllic, is unsettling. The truth of the matter is that people have always been - good and bad - people. These 'clusters' or 'outbreaks' do give pause and make one wonder if it was something in the water that drove people to such violent lengths. Here is an update with some additional ax murders added to the time line. 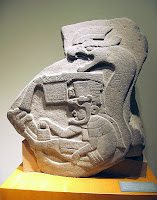 Meso American history is full of legends of their ancestors and gods who were best described as being tall, thin, and wearing long feathered or multicolored coats. Their physical description led to the use of the term 'feathered serpents.'
Who were these tall, thin faced people some sources suggest had blue eyes? Where did they come from? The legends suggest that they went away one day and were expected to return. When the Europeans arrived in the 15th century, they were heralded as the returning gods. So - where had these strange serpent looking gods gone in the first place?
Is there any evidence of a people resembling 'serpents' in look, movement, or speech? There may be. One clue is from ancient UR in Mesopotamia where the Ubaid 'lizard statues' were found dating as far back as 6,000 BCE. With their elongated faces, slit like eyes, and protruding noses they do resemble an upright snake.
Middle American temples are structurally closer to the Ubaid style than the later Egyptian. Other peoples represented on Mesopotamian temples, and later Egyptian, reveal a wide variety of ethnic groups. Dominate traits (eye shape, clothing, weapons, hair styles, etc.) were used to characterize and individualize these various people groups.
It might be argued that the slit like eyes, facial structure, and elongated body features might be abstractions of an emerging art form. Yet, some groups in the middle east associated snakes/serpents with wisdom and knowledge. Some associated them with a vast body of arcane technology or beliefs (sword making, herbal medicine, makeup, and other secret guild-like information).
So, how might that same serpentine elite have also emerged across the globe? Independent development is one answer. Another idea has been suggested that is intriguing and that is that early explorers came to these shores. Yet, another idea is that the Platonic story of a lost land in the Atlantic might not be just a myth but have roots in an area we know as Cuba. Andrew Collins does just this in his work, Gateway to Atlantis. His reasoning is sound and his evidences hard to dismiss.
When every year campsites and bones come to light pushing back human occupation and new connections based on research connect eastern seaboad US with Europe at an earlier and earlier date - maybe a sound, fair, and evidence based approach to the Atlantis story would not go amiss.
Posted by MARILYN A. HUDSON, MLIS at 12:37 PM No comments: