In this photo from 1945 a young Oral Roberts is shown attending his denomination's general conference, held in Oklahoma City that year.  Roberts is shown in the lower right corner framed by the ladies in the hats.  At the opposite corner is the young entrepreneurial minister, R.O. Corvin, who would be in the next year the first president of Southwestern Christian University (then located at 5000 NW 10th). 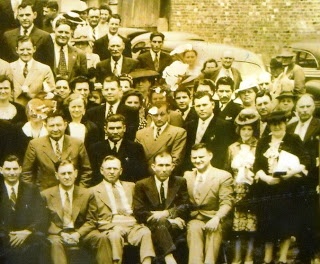 Posted by MARILYN A. HUDSON, MLIS at 11:43 AM No comments: Links to this post

In 1945, the Pentecostal Holiness Church meet in conference at the Oklahoma City First Church.  This church had begun in 1907 in the old 'Blue Front Saloon', 7 West Grand.  It later moved to 423 West California and in 1945 was located at 2046 E. 2nd Street.  In 1950, they relocated to 1701 N.W. 7th (9th and Blackwelder) under the leadership of pastor, the Rev. S.N. Greene.  The church, the First Pentecostal Holiness Church, was historic in being one of the first pentecostal churches in Oklahoma.   It is believed this image shows the church at 2046 E. 2nd in Oklahoma City. 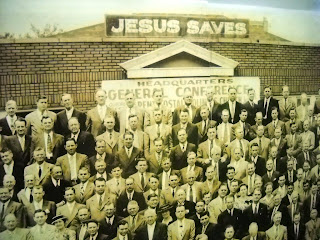 Posted by MARILYN A. HUDSON, MLIS at 11:35 AM No comments: Links to this post

According to NOAA, there have been several tornado storms since 1947 which ranked F4 and F5.  The Woodward storm of April 1947 was part of a multi-state outbreak, was an F5 and it claimed 116.   One in November of 1930 struck Bethany along the area of NW 39th Street.   "The tornado moved north-northeast from 3 miles west of the Oklahoma City limits, hitting the eastern part of Bethany. About 110 homes and 700 other buildings, or about a fourth of the town, were damaged or destroyed. Near the end of the damage path 3.5 miles northeast of Wiley Post Airfield, the tornado hit the Camel Creek school. Buildings blew apart just as the students were falling to the floor and looking for shelter; five students and a teacher were killed."  It was an F4 and over 20 were killed. Overall about 100 tornadoes have hit OKC in the last 100 years.
Posted by MARILYN A. HUDSON, MLIS at 6:02 PM No comments: Links to this post

It has always been the silent voices, the untold stories, the hidden truths and the buried subtexts which have appealed  as I began delving into history. Those invisible, ghost-like people that "society" often tried to silence, make go away, or simply destroy.  The life of a poverty stricken yet strong 12 year African-American girl from Muskogee, Oklahoma name Sarah Rector, is just such a tale. Walking the dangerous balancing beam of crafting her future as sharks of racism, greed, and self-doubt trolled her early years, she has much to share with modern women, modern society, and much to add to the history of African Americans.
Author and descendent Kelvin Rector is on a mission to share the surpring mosaic piece which helps to complete our knowledge of Oklahoma during the pre-statehood days, the impact of racism, the power of greed for oil and the wealth it represented, and the urge to manipulate society and some its members in order grasp that power away.
Posted by MARILYN A. HUDSON, MLIS at 11:40 AM No comments: Links to this post