This Month in Murder - 67 Years Ago. Betty Jack Stevens


The girl in a red plastic belt

Late July 1952 in northern Texas and Oklahoma was fairly normal. The mid to high nineties   It was the kind of weather locals called ‘leaving the door to hell open.’   Electric fans sold well and water cooler air systems were kept damp and freshening by barefoot children eager for any excuse to get wet in the soaring heat  and  humidity. In August of 1953 the victim was identified and efforts to discover her murderer were turning out to be more challenging than first supposed.
In the news was a story a of  surprise strike of Packinghouse Workers at the Oklahoma City Stockyards on July 22.  Other news included the high temperatures, news of Egypt’s King Forouk ousted, the Air Force assurances that the strange “UFO blips seen over Washington D.C. were nothing but “cold air”, and a Houston chlorine gas plant leak that sent over three hundred to treatment; all in all it looked like the month would end much on a pretty average note.
On Tuesday, July 28, 21 year old Betty Jack Stevens was hitchhiking.  She was the daughter of O.S. Stevens and had been born in Waxahachie before her family moved to the Dallas area. Her mother had died several years before but her aging father still lived in Grapevine and several siblings were in north Texas.  She had left home at age 16 for a short, and soon annulled, marriage. Ever since then she had been working the odd waitressing job and moving around in Texas, Oklahoma, New Mexico and Arizona.  She had a police record in a few locations in Texas but mostly for vagrancy and a couple for public intoxication.
Her exact timetable on that Tuesday is hazy in spots. Witnesses placed her leaving a West Dallas motor court early morning. Later, around mid-afternoon, she would tell people in  she had been to Odessa.  What is known is that she arrived in Henrietta, Texas over the weekend. That was where she purchased some new clothes. She discarded, perhaps because of the heat, a dark skirt and blouse.  She replaced them with a new blue sweater, blue jeans, lavender shoes and a red plastic belt. The colors went well with her dark eyes and dark hair with red highlights worn in a shoulder length cut, and her brown eyes.  Her eyes were one of her best features; piercing and direct with a no nonsense bravery.
Hitchhiking she arrived in the small town of Alvord where she stopped at the local Café. Alvord was a small community on US 81 and located northwest of the Dallas area.   The male owner spoke with her and she told him she needed to get back to a job.  Around 5 p.m. she finished a meal, as she had done so many times before,  headed out the door to find a ride.   No one ever saw her alive after that.
On Wednesday July 30, 1952 the forecast in the center of Oklahoma was more hot and sweltering.  The Stockyards section of the metropolitan area was still struggling with the effects of a strike of union workers at the Oklahoma City Armour plant. Competition from non-union Wilson & Company was creating some tension. With many workers off or on the picket line the yards were busy but sales were “lame.”
J.P. Brooks, of Yukon, was traveling along a minor county road (Richland Road) that Wednesday not far from the old West Point School (near SW 15th).  Along that stretch was a small bridge over the usually dry and sandy bedded Shell Creek. As he drove down the road that day, something in the ravine caught his eye.   A nude human torso was there in the ravine on a slight incline of the bank. Oddly enough, it could be seen from the road if the driver came from the south but was not visible to vehicles coming from the north. The nearest telephone was down the road at the farm of Lee Florence and Brooks hurried there to report his find to the County Sheriff.
At this time the community of Yukon did not even have a police force.  All law enforcement came through the Canadian County Sheriff or state police in the form of the State Crime Bureau (a predecessor of the Oklahoma Bureau of Investigation).  Tiny Royse, the county sheriff, had never encountered any crime scene like that which awaited in the dry creek bed.  Local doctors seemed thrown off their game as well.  Early examination of the mutilated female body described it as belonging to a young teenager of perhaps 13-16 years. 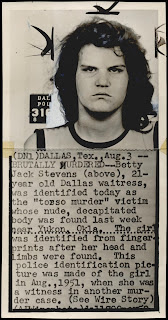