A 22 year old, newly married woman, driving down a country road from home to the school where her husband worked dies under mysterious and tragic circumstances. The end cause of death was fire but many questions lingered as to what happened between the start of her last journey and its fiery end.

Mildren Ann Newlin Reynolds died March 13, 1956 near Avard, Oklahoma and her charred remains were found in the front seat of a 1949, dove gray Chevy sedan. Billowing black smoke from the blaze alerted a nearby farmer out plowing but by the time help arrived it was already too late. 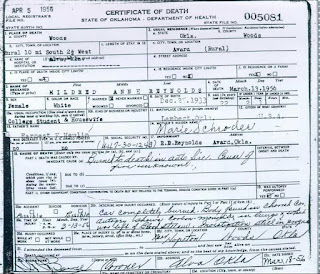 One possible scenario could be the woman was shot, thus causing the fracture, the subsequent "pulling" of the vehicle to the left as she might have jerked the wheel, overcompensating, to run into a tree, back up and start again with sudden erratic driving.

The unanswerable includes a  trampled down area by the side of the road,  along with the items such as charred buttons outside the vehicle, one partially charred shoe near the front left fender, her 90% scrotched coat some 10 feet away from the car, and one some distance away (250 ft.) near the fence near a flattened area  with a smudge of blood on it. Near this drops of human blood had been found on a thistle and some grass. All would tend to suggest she might have been outside the car - under her own steam or forced there by a killer. 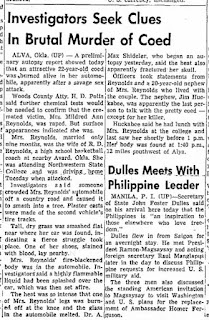 She would not be the first or last young wife to suffer from fatal encounters in the decades of the 1950's and 1960's. Their stories criss-cross the land leaving tragedy and mystery in their wake.

In the end, the tragedy of a young and dream filled life was cut short by circumstances some 60 years plus that remain open to question.

If inclined, light a candle, say a prayer or place a flower on their graves. What is more tragic than senseless death is when those who remain forget about the loss to all of our lives. When no one contemplates how the world would have been had that one life lived its fullest, enriching and making it something else - perhaps - something better.


Important sources on this story:
'60 Years Down a Cold Case Road'
'Found at the Scene'
'Find A Grave'
'60th Anniversary"
Posted by MARILYN A. HUDSON, MLIS at 6:22 AM