THE MISSING BRIDE OF 1958: MOORE, OKLAHOMA 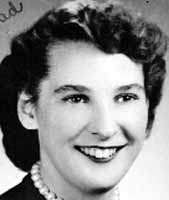 The Crown Motel, 9501 S. Shields in Moore (OK), was owned by the Blasdell family and managed by son Jim Blasdell in May of 1958.  It was on a busy thoroughfare in the growing south Oklahoma City suburb and linked drivers to the four quadrants of the compass.  One was  the southern linking US 77 and the new Interstate I-35.


A future thinking manager Blasdell was adding and upgrading his holdings. Seeing the growing need for living space he added apartments. All around Oklahoma City was booming and expanding and the future looked bright.  The Naval training facility in Norman was once more drawing people for training and the University there was growing as well.
The motel was in a prime location. It was a short jog to US 77 to take one south to Norman and north to Oklahoma City.  This military facility was located in the area of the present “South Campus” of the University of Oklahoma and just north of HWY 9 in Norman.


A young couple, married barely two weeks, took a room there.  The young husband was reporting for duty to the Navy Air Training Center in Norman and the bride would search for their first real home. Carol Ann Hlavac Batterman was an attractive young woman with a friendly disposition making and keeping friends easily. She had a savings account back in Illinois and wrote her parent’s long letters regularly.  She had married just two weeks prior to her disappearance; she and her husband were originally from the Chicago, Illinois area.


She had long brown hair, usually worn loose to nearly her shoulders. Her olive complexion was tanned and dotted with freckles on her nose and forehead. Over her clear eyes arched two bold eyebrows. Her smile was very open and pleasant and revealed two prominent front teeth.  On that morning her husband took their car to work, and the plan was that she would follow by bus and they would later go house hunting in Norman.
That day, no doubt eager to make a good impression on her new husband and prospective landlords, she dressed with special care for the expedition.  She slipped into a beige suit, high-heeled shoes, and proudly slipped on her yellow Provo Township High School class of 1956 ring with a black stone worn on her right hand, and a wedding band with 13 engraved stars (it was engraved on the inside with their initials  and wedding date ( "DB to CH - 5/17/58"). She put approximately $35 in a small white purse (6" x 3-4") and the couple’s only room key.  As the motel door closed behind her, the room held all her clothing, makeup, jewelry, and $100 in cash.


She was last seen waiting for a bus outside of the Crown Motel in Oklahoma City at 3:35 p.m. on May 31, 1958. She never got on the bus and was never seen or heard from again.
Witness reports varied.  One story from June recounted someone seeing her voluntarily enter a white ’55 or ’56 Chrysler station wagon with an OK auto tag.  Another reported a witness seeing a gray pickup truck, possibly a 1953 Ford, stop at the curb near Batterman shortly before she vanished. The witness could not be sure if the vehicle was connected because something interrupted the line of sight and when it was cleared the vehicle, and the young woman, were both gone. It's unclear if the driver of the truck (reported wearing a large cowboy style hat) had anything to do with her disappearance.


Oddly, in early June, a room key was returned via the mail to manager Blasdell of the Crown Motel. It was thought it was the room key last seen with the missing bride.  The lead was an intriguing mystery but ultimately a dead end.
East of Norman, was Reynolds Lake, a reservoir and dam, east of Lake Thunderbird . It was just north of HWY 9 and close to present SE 224. The caretaker, Mrs. E.F. Kelly, of the fishing resort reported in June having seen a woman struggling with two men in a white station wagon. It appeared she was attempting to jump from the vehicle but the men restrained her.    Several days later the caretaker reported she loaned a shovel to two men who claimed they had to dig worms.  She did note they did not appear to have any fishing equipment with them.  As a result, the lake became epicenter to searches for the missing woman.


Three years later, her young husband was living in Tennessee, seeking a divorce so he could marry another woman and start a new life.  Of Carol Ann there was no word.  Significantly, her savings account remained untouched and her parents, to whom she had written so often and at length, never heard from her again. They retained hope, however, that she was somewhere well and safe.

A retiring police officer in 1973 looked back at the case of Carol Ann Batterman as one that still baffled him with its apparent unsolvable nature. To this day, she is listed as missing, because although she was declared dead to accommodate the remarriage of her husband, a body was never found.

The time period of her disappearance was riff with undercurrents of crime beneath the "Leave It to Beaver" domestic bliss projected in the era.  Across the country in these years other young wives will also strangely go missing and some of their cases also remain open or unsolved.

Silken webs may also stretch out from that same Naval Base in Moore - Norman to touch other crimes. A busy crossroads of highways, military bases with changing personnel, and a growing university leave many possibilities.


Carol Batterman is still listed as a missing person on The Charley Project. They gave me permission to use the photo. This author had brief contact in 2014 with a researcher working with her family hoping to finally solve the case (Weston DeWalt, of DOCUMENTARY SCIENCES (Research l Investigation l Analysis) in Pasadena, California USA). Several Capitol Hill High School students in south Oklahoma City and other young women in the region had disappeared in the late 1950's and the possibility of a serial killer in the region seemed possible to this researcher. On that sunny May, however, the young bride eager to find a new home to begin married life joined that day a select group of unfortunate travelers whose journey was into oblivion in a vehicle fashioned of mystery and unanswered questions.